What is a solar thermal power plant?

It is a solar thermal power plant that uses concentrating optics to focus solar radiation on a focal point or focal line on an absorber which is converted into thermal energy. The biggest advantage of high-temperature solar power plants is that the heat energy generated can be stored for several hours and recalled at any time.

There are two different systems:

Solar-farm power plants are usually made up of many individual parabolic trough collectors, where the heat energy generated is transferred to the steam turbines via a very long pipeline network. The concentration ratio here is C= 60-80 suns. The power generators are driven by steam turbines and in this way electric current is generated. It is the same process as in conventional coal-fired power plants.

In addition to the advantages mentioned above, parabolic trough power plants also have many disadvantages.

The first power plant of this type was patented in 1912 and put into industrial operation in Egypt in 1913. 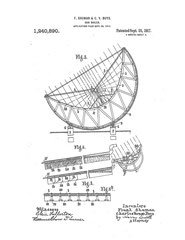 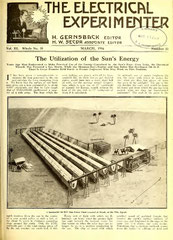 Another version of solar farm power plants is dish power plant. These paraboloid collectors have a Stirling engine at the focal point, which converts the thermal energy directly into mechanical energy that generates the electricity. Since the parabolic shape of the collectors can concentrate much more solar energy, the concentration ratio is C=1000 suns thanks to the biaxial tracking system.

Similar to parabolic troughs, wind, dust and sand cause significant optical losses in these power plants.

Solar tower plant. Unlike the two solar power plants mentioned above, the tower power plant consists of a field of several thousand mirrors, which focuses the concentrated solar radiation onto an absorber at the top of the tower.

Temperatures of around 1000 °C can be achieved. The advantage of this design is that many kilometres of piping can be saved. This also eliminates the heat losses that occur in the pipes.

Just like the other power plants, the mirrors are exposed to wind, dust and sand. The resulting optical losses are considerable. Since the countless heliostats of the sun have to be tracked in two axes, additional optical losses are caused by the wind load. The concentrated rays miss the absorber.

According to a study (11), the heliostat field contributes 50% of the total costs of the power plant and causes 47% of the losses per year. 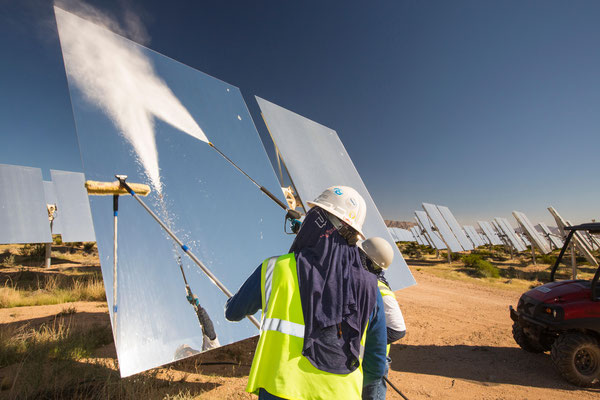 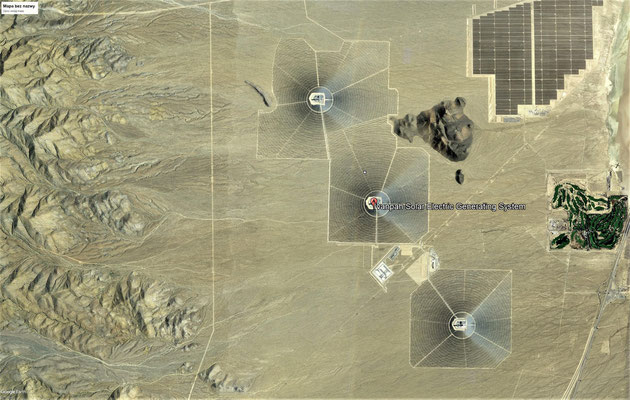 How many weeks or months would it take these workers in Ivanpah to clean all 347,000 heliostats by hand?

And what do these mirrors again look like after two weeks?

All these circumstances lead to the following conclusion:  If someone wants to build solar power plants in the desert areas, then considerable losses must be expected. However, the losses can be avoided with suitable technology.

When developers present their ideas to investors, they submit business plans and other documents. In this way, they want to convince the financiers that they can invest their money properly.

More than $2.2 billion was invested in the Ivanpah solar power plant, and investors were promised enormous profits. The fact that this power plant is about to close is also due to the fact that it actually uses only a tiny fraction of the heliostats. It is simply not technically possible to use all the mirrors at the same time. The 347 thousand mirrors are arranged in such a way that they have to follow the daily course of the supposed movement of the sun. Since they are arranged in a circle, only a certain part behind the tower can be mainly used at any given time. These other parts, standing flat in front of the tower, reflect only a fraction of the solar radiation. The photos below show how many of the Helios are mainly optically active.

Assuming that the area marked in red corresponds to about 25 percent of the solar field, it is clear from the images how meagerly the optically active mirrors are used.

In this short video, taken from an airplane, this fact can be seen more clearly.

This is only a confirmation of what Padre Himalaya demonstrated with his Pyrheliophero: it only takes a small slice from the dish to generate abundant energy.

A January 06, 2020 report from Bloomberg Businessweek